If you’re a sociopath like me, then a virtual scenario of toying with people’s emotions leaves you quite entertained.  Detroit: Become Human lets you do just that as you control a dramatic and story driven experience via dialogue options, but more importantly, you’re chosen actions all play a big part on how the game plays along.  Take for example, the demo puts you directly into a critical situation from the start as a hostage negotiating android that coincidently requires you to talk to a hostile version of yourself that just so happens to be holding a human child over the edge of a high rise building.  This game posts you in a world that have machines serve as janitorial and household service droids that become a normal commodity in this otherwise bleak future. 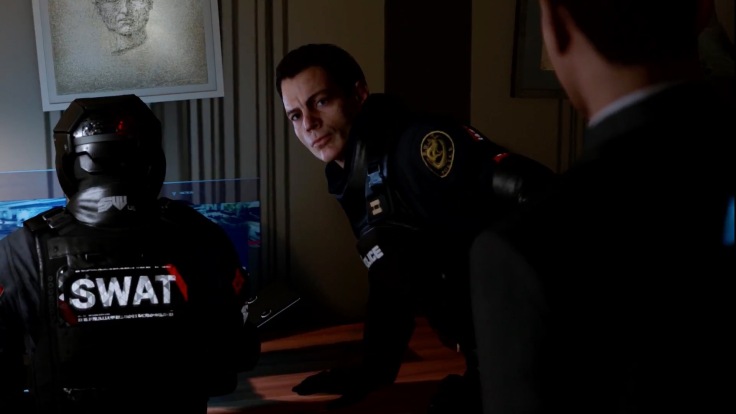 Although, as basic as their tasks may seem to be, their personalities and emotions that evolve can be more complicated than this society may have realized.  As your character is put in a tricky situation, your purpose is laid out quite clearly, even if it means the police force could give two shits less about giving you any information about what’s going on, as you serve more as taking the brunt of the danger and responsibility.  It’s up to you to waltz around the apartment seeking out visual cues to gather more intel on the situation, but the game doesn’t let you forget what’s going on in the background, you’ll hear the hostage situation escalate as you browse the reading material from the dead father shot just moments before.  The less you know, the less dialog options and choices you can go with when resolving the situation.

However you play it, most fans of games like Heavy Rain, and Beyond: Two Souls should know you’re getting the same creativity and development team, Quantic Dream, that holds down this genre of interactive dramatic gaming pretty well.  So you will want to keep a look out for this game’s release very soon on May 25th!  Tell us what you thought of the demo.  And do you think this game will surpass expectations or fall flat?