At first glance, and our first impression, held great appreciation for the aesthetic and look of the game.  Finding Artyom in familiar underground surroundings brought on a fantastic opener to the much anticipated third installment to the series.  The horror-survival vibes you get walking through dark subway tunnels puts things on edge as you’re anxiously clearing each corner.

There is a lot to be said about Metro and the occurring story, but the third game is certainly not a bad time to start and to be introduced to this cold and post-apocalyptic world.  Dwelling from the frozen and lost city of Moscow,  your character’s motive is clearly to find life outside of their region.  As the story unveils rapidly, Artyom and friends find themselves out of the city quite early by train.  It doesn’t take too long to explore a larger world as you find your group from damp to arid territory, apparent seasonal changes, and plenty of open area to hunt treacherous mutants!

Metro Exodus give a breath of fresh air to the series by delivering not just a consistent change to your environment but providing a semi-open world through every stop your locomotive-riding band takes.  Each location you’ll find new friends, enemies, overlords, survivors, and a healthy amount of mutated wild-life that want to make you lunch.  Although, to call Metro a FPS is confusing to say even though you get clear vibes of Wolfenstein and FarCry from the aura of the game.  There happens to be an encouraged stealth approach to every obstacle or main story goal when you come across it.  That being said, there are glimpses of full-on battles with your squad and local dangerous factions as well.  In most cases, you will be flying solo or with one or two NPCs in your endeavors. Through your trek through Europe, you find yourself early to an array of weapons and the ability to customize them on the go or at designated work stations.  This becomes crucial as you painfully can handle only three weapons in your travels.  Switching the mechanics of your weapons may become an important step before tackling different areas and the body of weapons can prove to withstand upgrades with different calibers of ammunition, scopes, and rates of fire.  Finding material can also be an everlasting side mission as it can be very hard to come by.  Don’t expect the ability to drop endless magazines into enemies like they’re going out of fashion.  This obstacle gives another element of survival to the game that shows a conservative or stealthily approach may be your better option. 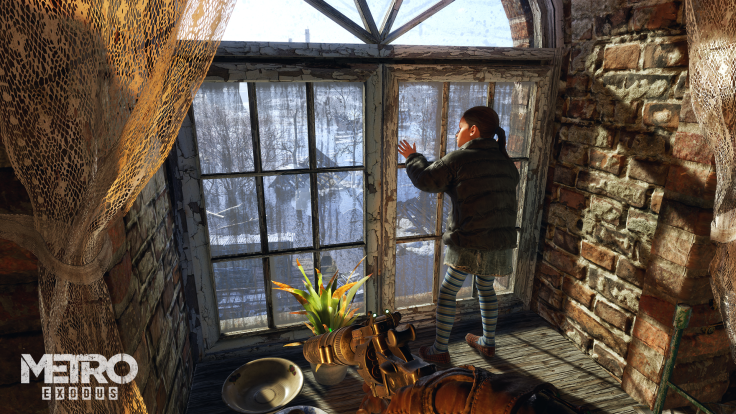 The story is great and playing through each land does give you time to empathize with the hopes of seeking a better home while helping those in trouble along the way.  NPCs can be long winded at times, and comically so, when you anticipate each statement to be a closer to walk away from, but NO!  They keep going!  Overall, Metro Exodus changes things up with each place you visit, the gameplay is fun, and its visually stunning to look at.  We wish there were more instances of RPG elements as far as buying and selling inventory and the management of your crew.  Its true that it could become too familiar with Fallout’s style, yet we know Metro came out a time where the multiplayer spinoff still stings with fans and Exodus could help scratch that itch.  We definitely recommend you try the game especially as the shrinking selection of true single player and story driven action games have become more of a reality.  The AI is not always perfect but the combined challenge of facing the elements, conservation of material, and the fight against everyone and everything won’t let the game give you a breeze through.  Tread lightly, Comrade.